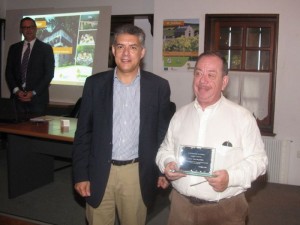 Konstantinos Agorastos, the governor of the Region of Thessaly and culinary genius Elias Mamalakis.

Distinguished Greek journalist and culinary genius Elias Mamalakis was honored recently by the Regional Governor of Thessaly Konstantinos Agorastos for his valuable contribution to the promotion of the region’s local cuisine as a cultural value.

The award ceremony took place on the sidelines of the recent conference organized by the Region of Thessaly entitled “The contribution of cultural values to local development” that took place in the village Milies of Pelion, Magnesia.

During the conference, guests were informed on the region’s pilot initiative “Milies-Vizitsa: Station of Architecture and Tastes.” The initiative aims to establish cooperation between the local administration, hoteliers, restaurants and shops to promote a characteristic identity of the two villages. 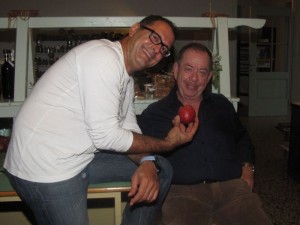 Nikolaos Pitsoulis, from the European project SY_CULTour for Pelion, and Elias Mamalakis.

Through this cooperation, the region plans to offer experential experiences to visitors through its main attractions: the train station in Milies, its local architecture and local cuisine.

The conference took place within the framework of the European project SY_CULTour that includes Pelion as a pilot area.

The aim of the project is to improve the management of cultural values in rural areas in order to increase their economic and social development.

The Greek Islands Come Closer To Scotland Via easyJet