“Our Greece Globally Yours” Campaign Presented To Foreign Diplomatic Missions 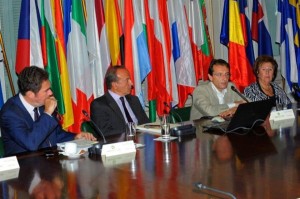 The “Our Greece Globally Yours” campaign that promotes the “other side” of the true and unspoilt Greece was recently presented to representatives of foreign diplomatic missions, delegations and institutions at the Information Office of the European Parliament in Greece.

The presentation was given by Geo Routes & Aegean Routes (cultural experiental journeys) and aimed to promote Greece’s authentic cultural, environmental and human capital and its contribution to culture, sciences and democracy across five millennia.

The presentation was held under the auspices of the Hellenic National Commission for UNESCO and supported by the European Commission Rep. Office in Greece and the Information Office of the European Parliament in Greece.

Macedonia-Thrace Hoteliers To Hold Conference At Philoxenia 2013 In Thessaloniki