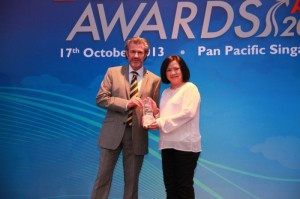 Emirates SkyCargo, the freight division of Emirates, has bolstered its position as a leading global player in air cargo industry by winning the “Overall Carrier Of The Year” award at the Payload Asia Awards 2013 during the Air Cargo & Logistics Asia 2013 Conference & Exhibition held in Singapore.

Emirates was presented the accolade after being shortlisted by a panel of judges, and being voted the best in the category by Payload Asia readers.

Criteria for the award included the carrier’s network coverage and development strategy, operational performance in 2012, customer service and product innovations, as well as market leadership, responsiveness and adaptability.

Emirates’ 206-strong fleet, one of the youngest in the skies, serves 135 destinations in 76 countries on six continents.

In the 2012-13 financial year, Emirates SkyCargo carried 2.1 million tonnes of cargo across its network, contributing 15 percent – US$ 2.8 billion – of the airline’s total transport revenue.