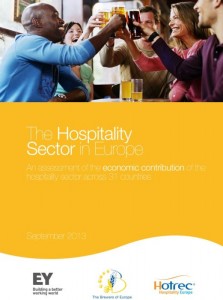 The hospitality sector plays a critical role in fighting youth unemployment and is essential for jobs and growth and the health of other sectors, according to a Europe-wide study prepared by Ernst & Young (EY) and presented during HOTREC’s 67th General Assembly recently held in Athens, Greece.

HOTREC is  the business association representing the hospitality sector in Europe.

The study found that  in 2010 Europe’s hospitality sector – directly or indirectly – created 1 trillion euros in output, equal to 8.1 percent of the EU’s total economic output, and that the multiplier effect of 1 euro spent in the hospitality sector means another 1.16 euros invested in the wider economy.

According to the study, which includes country-by-country reports, the sector in 2010 contributed 126 billion euros to government treasuries in excise duties, Value Added Tax (VAT) and employment and social security taxes, and supported approximately 16.6 million EU jobs, or one in every 13 jobs.

At the same time the hospitality sector contributed 460 billion euros to Europe’s GDP.

The reports underlines that measures adopted in times of austerity, which increase tax rates at a time when disposable incomes are falling, are likely to undermine the ability of the sector to generate growth.

“The short term response to this is likely to be cost cutting measures, and later, a loss in permanent capacity,” according to the study.

HOTREC has called for more-supportive EU policies to boost the sector’s performance.

The nature and performance of the European hospitality sector 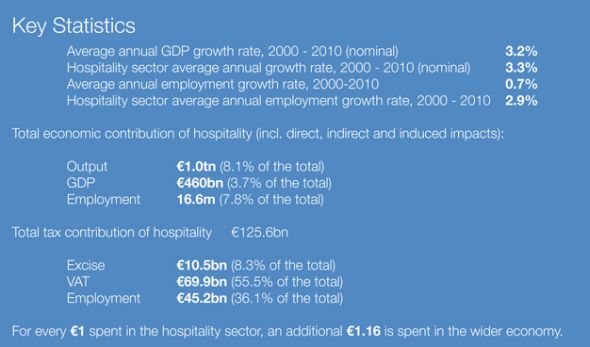