Kefalogianni: 2013 Is Undoubtedly A Record Year For Greek Tourism 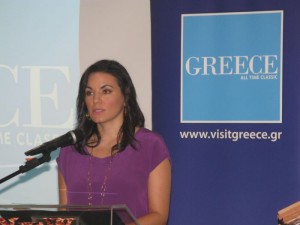 Greece has so far welcomed 760,000 more tourists compared to last year, which is an 11 percent increase compared with 2012, Tourism Minister Olga Kefalogianni informed on 16 October during a presentation of the country’s current communication campaign to foreign markets.

“The year 2013 is undoubtedly a record year for Greek tourism,” she said.

Although final figures have yet to be released, recent data showed that Greece’s travel balance of payments recorded a surplus of 579 million euros, reflecting a 30.4 percent rise in travel proceeds, compared with 2012.

Revenues of the first eight months of the year are displaying a 17.9 percent increase compared with the previous year.

“This increase was not accidental nor was the country’s advertising campaign expensive but it was based on a specific plan,” she said.

According to Mrs. Kefalogianni, the tourism ministry’s strategy is based on four axes:

Mrs. Kefalogianni said that communication actions were currently under way aimed to extend Greece’s tourism season until the end of the year and she referred to the Tourism Ministry’s plans to promote tourism in 2014.

She said the country’s promotional activities for 2014 have already been launched and aim to boost early bookings and sales of package holidays during the “crucial” September-April reservations period.

Greece’s current communication campaign for 2013-2014 is based exclusively on promotion via the Internet and social media.

Greece Losing Over 1 Billion Euros Due To Illegal Hotels