Greece And Russia To Sign Framework Agreement On Tourism 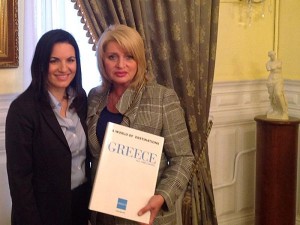 The agreement will aim to further strengthen the tourism relations of Greece and Russia.

During a meeting held in Moscow on 14 October, discussions between the two ministers focused on the promotion of religious tourism and mainly pilgrimage tourism in Greece given the increased interest of Russian visitors.

According to a press release, the two sides also had a very enlightening conversation on securing visas for Russian travelers in a timely fashion. It is expected that this would contribute to the extension of the tourism season and development of quality tourism in Greece.

Speaking on the issue, the tourism minister said she would take the necessary initiatives to further facilitate the issuance of visas for Russians.

In regards to air connections, the possibility of expanding existing traffic rights, which would help increase arrivals to Greece, was also looked into.

When speaking to the press after the meeting, Mrs. Kefalogianni thanked the “thousands of Russians that visited Greece” this year and showed confidence to the country.

According to the Consulate General of Greece in Moscow, the number of visas issued to Russian tourists that visited Greece during the first eight months of the year increased by 56.81 percent to 776,732 against 495,312 for the corresponding period in 2012. In August 2013 alone, the total number of visas issued reached 176,560, a 40.59 percent increase compared to the same month the previous year.