Greek and foreign ultramarathoners will follow the footsteps of ancient Athenian long distance runner Pheidippides and cross 246 kilometers from Athens to Sparta during the 31st SPARTATHLON ultramarathon race to be held 27-28 September.

Over 330 long distance runners from 35 countries have registered for this year’s international historical ultramarathon race. From Greece, 45 runners have signed up.

The race will kick off Friday, 27 September, at 7am from the Acropolis in front of the Herodion. 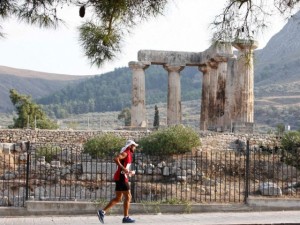 Long distance runners who cross the finish line in Sparta, in front of the statue of Leonidas, will be honored with an olive branch and water from the Evrotas river.

Renowned ultramarathoners to take part in SPARTATHLON 2013 include Ivan Cudin from Italy (winner in 2010 and 2011), Yuji Sakai from Japan (second place), Michael Morton from the US (first time running in the ultramarathon, he holds the current record for distance run in 24 hours with 277.543 kilometers) and Szilvia Lubics from Hungary (winner in 2011).

The Spartathlon is a historic ultramarathon held at the end of September every year in Greece. It is one of the most difficult long distance races of great interest due it historical background as it revives the footsteps of Pheidippides, the ancient Athenian runner. In 490 BC, before the battle of Marathon, Pheidippides was sent to Sparta to ask for help in the war led by the Greeks against the Persians. According to Herodotus, Pheidippides arrived in Sparta the day after his departure from Athens.

The exclusive sponsor of the 31st Spartathlon is the Stavros Niarchos Foundation.