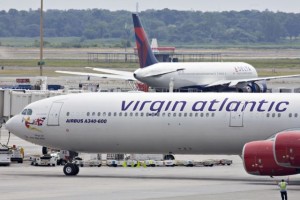 The DOT’s ruling is confirmation of the clear consumer benefits of the partnership and will allow the carriers to deepen their cooperation, offering more flight choices for travelers on both sides of the Atlantic and in particular improving the travel options for business customers in the New York to London market.

In their filing to the DOT, Delta and Virgin Atlantic argued that some 60 percent of the slots at London Heathrow Airport are controlled by British Airways and its joint venture partners. As a result, the carriers dominate air travel between the U.S. and the U.K, including the New York-London market.

By combining Virgin Atlantic’s Heathrow slots and U.K. brand strength with Delta’s powerful U.S. network, the joint venture will offer significant competition in the market and benefit consumers on both sides of the Atlantic.

Effective 30 March 30 2014, Delta and Virgin Atlantic will operate a total of 32 peak daily nonstop flights between North America and the U.K. of which 24 flights will operate between London Heathrow and popular U.S. destinations such as Los Angeles, San Francisco, Atlanta and Washington.