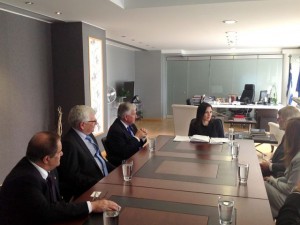 Arrivals to Greece from Australia this year increased by 28 percent compared to 2012, it was announced during a meeting held in Athens today, 13 September, between Greek Tourism Minister Olga Kefalogianni and a Victorian Parliamentary delegation.

During the meeting, Mr. Smith and Mr. Atkinson informed Mrs. Kefalogianni on the great interest from the Australian side to invest in Greece.

More specifically, discussions focused on an investment plan for the island of Ithaki that involves the creation of a luxury resort that would include golf courses. Golf is a highly popular sport in Australia.

On her part, the tourism minister presented the Tourism Ministry’s action plan that includes promotion via the Internet and social media channels, to increase arrivals to Greece from traditional markets but also from so-called distant markets such as Australia.

The tourism minister said Greece encourages foreign investment in tourism and therefore is in the process of modernizing the country’s infrastructure.

She also referred to Athens as a tourism destination with “significant growth prospects.”

The Victorian Parliamentary delegation arrived in Greece following an invitation by the President of the Hellenic Republic Evangelos Meimarakis. The aim was to advance the significant historic, cultural and economic links that exist between Victoria and Greece, as a result of the large Greek Australian community that resides in the state.

SETE To Give Out Three Scholarships On Tourism Management