Hotels In Athens-Attica Still Troubled Despite Rise In Arrivals 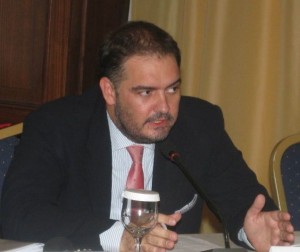 The number of tourists staying in hotels in Athens-Attica during the first eight months of the year, showed a positive sign for the first time in six years, according to data released at a press conference held Wednesday 11 September by the Athens-Attica & Argosaronic Hotel Association.

According to the association’s president, Alexandros Vasilikos, during the January-August 2013 period, hotels in Athens-Attica recorded an 8.1 percent increase in occupancy and a 5.8 percent rise in revenue per available room (RevPAR) when compared with the previous year.

However, Mr. Vasilikos stressed that the “encouraging signs” of the last four months (April-August) – that apply mainly to 4- and 5-star hotels – are not able to cover the tremendous losses the hotels have recorded since 2007-2008 in regards to beds, revenue, quantity and quality of incoming tourists to the Greek capital. 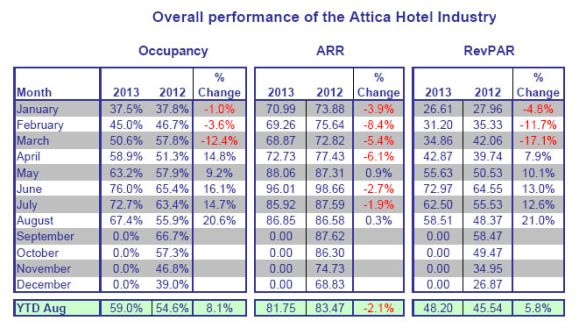 The data is weighted on rooms available in 3-, 4-, and 5-star hotels Attica, excluding the islands & Piraeus. Data provided by GBR Consulting.

“Hotels in Athens are not out of danger”

More specifically, Mr. Vasilikos said the hotels of Athens-Attica were following an “impressive downward path” since 2008.

According to data on the performance of Athens-Attica hotels from 2007-2008 until 2012-2013, there is a 24.1 percent decline in the average occupancy rate, a 16.2 percent decrease in the average room rate and a 36.4 percent drop in revenue per available room.

“The slight increase of the last four months does not put Athens-Attica out of danger as now the viability of Athenian hotels is the major issue,” Mr. Vasilikos said.

Over the past six years, 89 hotels of all categories in Attica (that add up to some 3,679 rooms and 6,872 beds) have shut down due to the pressures of the crisis, high operating costs, high cost of borrowing from banks, ongoing defamation of the destination, reduction in clientele and the absence of political and municipal will to tackle the Greek capital’s unending problems.

Mr. Vasilikos told journalists that coordinated synergies and innovative decisions are required for the city to recover. 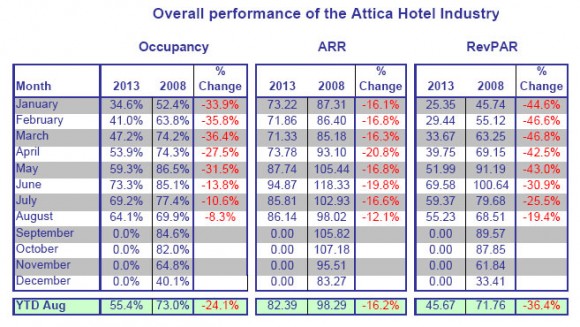 The data is based on 27 hotels participating in the survey from 2008-2013. The data was then extrapolated using all rooms available in 3-, 4-, and 5-star hotels in Athens, excluding the islands and Piraeus. Data provided by GBR Consulting.

Furthermore, Mr. Vasilikos pointed out the “significant losses in international arrivals” when comparing data from 2007-2008 with today’s incoming tourist traffic to Athens.

According to data announced recently by the Association of Greek Tourism Enterprises (SETE), 1,823,078 tourists arrived in the Greek capital during the January-August 2013 period. During the same period in 2007-2008, international arrivals in Athens had reached 2,442,560.

Bruce Willis Rumored To Have Bought Villa On Corfu