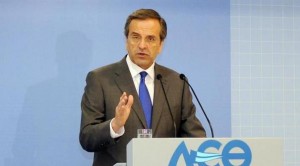 Greek Prime Minister Antonis Samaras said on 7 September that Greece’s economy will recover in 2014 as the government will present a primary budget surplus and no additional measures will be needed.

Speaking at the 78th Thessaloniki International Fair opening in Thessaloniki, the Greek PM underlined that by 2020 Greece’s economy will reach pre-crisis levels.

During his speech, Mr. Samaras mentioned the latest optimistic data from the country’s national statistics office ELSTAT that showed the economy shrank less than expected in the first half of 2013.

He then referred to a “record” rise in tourist arrivals to Greece this year.

“It is estimated that arrivals will reach or even surpass 18 million, the first time so many tourists came to Greece,” Mr. Samaras said.

Mr. Samaras stressed that such levels were not budgeted for at the beginning of the year and “have never happened before in our country.”