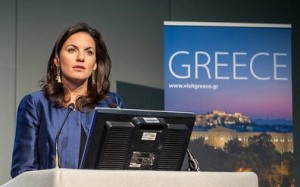 Next year can be even a better year for Greek tourism, Tourism Minister Olga Kefalogianni said on 7 September on the sidelines of the 78th Thessaloniki International Fair opening in Thessaloniki where she accompanied Prime Minister Antonis Samaras.

While talking to the press, Mrs. Kefalogianni referred to the positive messages of this year’s tourism season in regards to arrivals and revenue.

The tourism minister said the ministry achieved its goals and that “this success leads us to continue the national tourism strategy.”

According to Mrs. Kefalogianni, the Greek Tourism Ministry will now concentrate on maximizing the benefits from the tourism season’s extension.

“The messages we have received are positive. This means additional revenue for the Greek economy, GDP growth and new jobs,” she said.

“We are on a new course that aims to place Greek tourism on the global tourism map,” she concluded.

According to recent data, foreign tourist arrivals increased by 9.9 percent during the first eight months of 2013. In August 2013 alone, international arrivals were up by 10.5 percent.