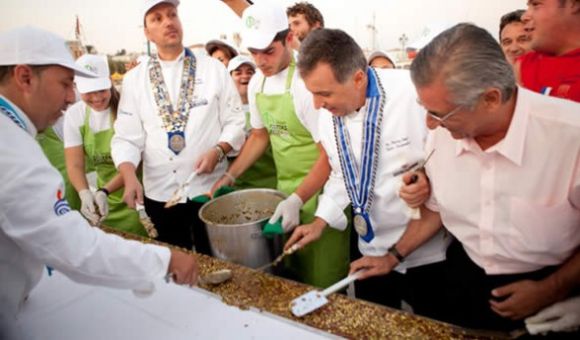 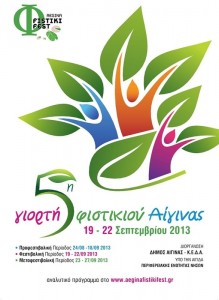 Aegina, the first capital of the modern state of Greece and the island of the pistachio nut, is getting ready to is host the fifth annual “Fistiki Festival” this month.

A four-day program that will run 19-22 September 2013 will include events of a cultural, enjoyable and educational character, with a particular emphasis on gastronomy.

The trade fair, set up along the harbor of the island, is the core of the celebrations. Some 60 kiosks will offer guests local products varying from many pistachio and other pistachio-based products, as well as local agricultural products, such as Aeginitan cheese and honey, to a plethora of Aeginitan traditional goods such as ceramics, handmade kopaneli-lace, jewelry and much more.

The festivals’ program will include art exhibitions, folklore dances, songs, lectures, plays and other performances. Creative and interesting demonstrations for children will also take place.

The opening ceremony promises surprises for everyone!

A gala concert by Christos Nikolopoulos, a top Greek folk songs composer and one of the most talented bouzouki virtuosi, as well as a musical concert by talented local musicians will also take place.

The Fistiki Festival attracts thousands every year who get the chance to visit the island’s unique archaeological sites and sample some of the many other beauties of the island. 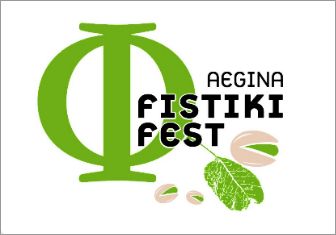 10.00 Aegina harbour –  the old quay:“Aeginitan jugs sunk in the sea,” retrieval of the jugs painted by Aeginitan artists and sunk during the 4th Pistachio Festival in 2012

18.00 Aegina Harbour: Opening of the trade fair booths
18.00 Markellos Tower – Beginning of the childrens’ game sessions which will take place throughout the duration of the festival by the Greek Girl Guide troupe of Aegina
18.30 Markellos Tower – Opening of the exhibition “Secrets of Stone”. Works by fifth and sixth gradestudents who attended seminars on stone processing given by Spyros Galari,TakiMarinis and Sozos Johnny
19.00 Markellos Tower – “Garoufiada”, performance by the theater group of the First Primary School, Aegina.
21.00 Courtyard of the Laografico Museum: Concert for cello and piano entitled “From Russia with Love” – Works by Stravinsky, Prokofiev, Rachmaninoff. Cello:AsteriosPouftis, Piano: ThaliaAthaniti

18.00 Markellos Tower: Gamesby the Greek Girl Guide troupe of Aegina
18.00 Cathedral: Guided tour of the Capodistrian buildings by Father Emmanouil Yannouli and Alexis Kraus
18.30 Markellos Tower: “Riddles and more…” by Kostas Stavropoulos
18.30 at the Polios Estate: Artists create and exhibit their works in the estate. The exhibition will open on Sunday 22nd September. Organised by Iris Kritikou
20.00 Aegina Harbour: Opening ceremony, directed by Stavros Groza
21.15 Aegina Harbour: Official greetings, followed by an award by the mayor to Markus Dragoumi for his contribution on the traditional music of Aegina
21.45 Ag. Nikolas of the Sea: “Minos meets Afaia”.

18.00 Markellos Tower: “Children’ssweet treats” – Young aspiring confectioners create under the guidance of experts.
19.30 N.O.A.: “Mermaid Tales” – Stories told by ErasmiaAlifanti
20.00 Press Centre Aegina – outside: A gastronomic journey piloted by the Pistachio by the deputy chairman of the Cretan Master Chefs, MichalisPanagiotaki.  A Gourmet club meeting by the Amari Shepherds of Crete with Aeginitan chefs.
21.00 Harbour – Ag Nikolas of the sea: Great musical concert with Christos Nikolopoulos (the concert is kindly sponsored by the Saronic Islands Regional Union)

18.00 Markellos Tower: “Travelling with the Mermaid and young Alexander”. Musical show with the childrens’ choir from the Experiential Music Center – Mariza Koch.
19.30 Markellos Tower: Party with contemporary dance, music, and treats with Maria Yiannopoulou
20.30 Aegina coast: “With one boat…” by StelioTheriano. A trip by sea with the amateur fishermen accompanied by traditional songs and music.
21.00 Aegina coast: Closing ceremony with traditional entertainment with Demetris Karaoulanis

11thPanhellenic Torch Run: The Municipality of Aegina will take part this year with the Panhellenic Association of Voluntary Blood and Organ Donor Corps and the flame will cover the island carrying a message of love and solidarity with the Aeginitian volunteers.

19.30 Courtyard of the Laografico Museum: “Life in a black and white frame”, Aegina holidays in the 60s through the movie lens, revived by the Young Theatre Group of Aegina.