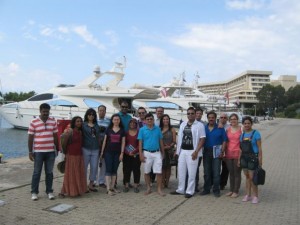 A group of Indian travel agents were recently introduced to Chalkidiki by the area’s tourism organization within the framework of a familiarization trip to Thessaloniki organized by ASIT (Anatolia Splendid Incoming Travel) Greece and Turkish Airlines.

While exploring the destination and specifically Sithonia and Kassandra, the Indian travel agents said the destination was a very interesting travel option for their customers in India. They agreed that the closeness of Halkidiki to Thessaloniki could easily include the destination in joint winter travel packages while it could stand on its own as a summer destination due to its beaches and resorts.

The Halkidiki Tourism Organization is very interested in attracting Indian tourists and already made a first approach to the Indian market when Indian publisher-journalist Chandragupta Amritkar visited Chalkidiki in May on a press trip. Mr. Amritkar’s stories appear in magazines that are distributed to Indian businesses and reach some 2,100,000 readers.

Over 10 million Indians travel abroad every year but rarely included Greece as a destination of preference, mainly due to the absence of an airline connection between Thessaloniki and cities such as New Delhi, Mumbai (Bombay) and Kolkata (Calcutta).

However, this can change as Thessaloniki is now accessible via Istanbul with Turkish Airlines flights.