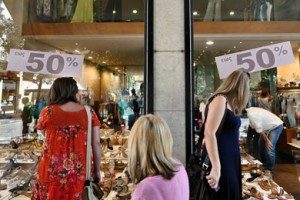 Turnover during the summer sales was once again lower this year, although the rate of decline was smaller than previously, while tourism hotspots actually reported an increase in sales this year.

The sales window that closed last Saturday, 31 August) showed an average drop in turnover of 25 percent year-on-year, against 29 percent the year before, according to data compiled by the Commerce and Services Institute of the National Confederation of Hellenic Commerce (ESEE).

Major cities such as Athens and Thessaloniki posted declines of 15-25 percent on an annual basis. In areas of mainland Greece outside the major cities, the drop amounted to 25-35 percent, while in areas near the borders (such as Florina) the fall came up to as much as 60 percent.

However, several islands and mainland tourist resorts posted an increase, with Kalamata reportedly registering the biggest turnover in the last four years.

The next sales period will be in November.