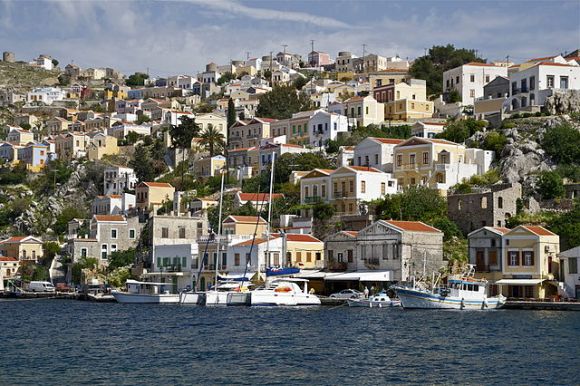 Greek destinations have been selected as shooting locations for foreign films before due to their traditional villages, beautiful beaches, harbor towns and ancient history but in the case of Symi, part of the Dodecanese chain, its “spooky” atmosphere did the trick.

British production company 1066 Productions, based in Surrey, UK, has announced that its upcoming film – entitled “The Judas Curse” – will largely be shot on Symi, located some 41 kilometers northwest of Rhodes.

The production company underlined that the film is not a “slash movie.” As 1066 Productions describes it, the film is “a supernatural horror and takes its inspiration from the era of great 70s horror films (tonally, stylistically and intellectually) like The Exorcist and Rosemary’s Baby.”

The script for the film is written by James Collins, who has lived on Symi since 2002.

“The Judas Curse” will be directed by award-winning Navin Dev who found the Greek island perfect for a horror film that seeks to recreate “the classic, down and dirty style of the 1970s typical of the John Carpenter style where the suspense relies heavily on atmosphere and suggestion, and of course the music.”

“The film will be shot on location in the dark and mysterious ruins of Horio, which are largely unknown to filmmakers but which provide the perfect backdrop to a story that draws inspiration from some of the historic myths and legends that have built up around Judas Iscariot over the centuries,” the director said.

“On Symi there is still an annual and controversial ritual involving the burning of Judas,” Mr. Dev underlined.

This is not the first time Symi will appear on the big screen. The island has been used as a backdrop for “Pascali’s Island,” “The Guns of Navarone” and “Anna’s Summer.”

The shooting of “The Judas Curse” will begin on Symi in October 2013.

For a synopsis of the film, press here.