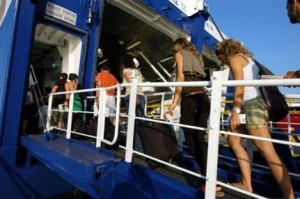 Passenger traffic during July and August at the ports of Piraeus and Lavrio dropped slightly compared to last year, while the port of Rafina reported an increase, according to figures provided by the Greek Coast Guard that run up until 26 August.

From the beginning of the summer, the Greek Coast Guard distributed the charter of passenger’s rights to all ports of the country, in cooperation with the Consumer Association of Greece.

In addition, a special complaint form in Greek and English is now available to all passengers and can be found in prominent locations on ships.

Foreign Tourist Arrivals To Greece Expected To Surge This Fall