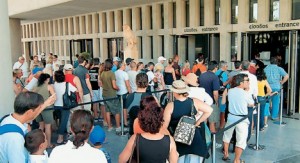 The Greek Culture Ministry recently held a meeting with the Union of Cruise Ships Owners and Associated Members and exchanged ideas on how to deal with the congestion at popular Greek attractions due to large volumes of tourist flows this summer.

The meeting followed reported incidents of extremely long queues at some of the country’s busiest tourist attractions (the Parthenon and the Acropolis Museum included).

During the meeting it was mentioned that such congestion at tourist sites occur especially when multiple cruise-ship crowds arrive to Greece.

“The arrivals of cruise ships are more than expected and this creates problems that we are ready to work out,” Culture Minister Panos Panagiotopoulos said.

“We are very interested in cruise arrivals to Greece,” the culture minister added.

The minister said a joint committee would be established immediately to improve the situation.

On their part, tourism professionals have always blamed the lack of coordination at the entrances of archaeological sites and museums.

Restaurant VAT Drops But Not All Greek Businesses Respond