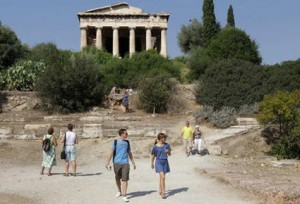 Statistics on international tourism recently released by the UN World Tourism Organization showed that Greece with 15.5 million visitors in 2012 ranked 17th among the most popular tourism destinations in the world. Tourists in Greece last year spent an average of $832.3 each. Total tourism revenue in the country added up to $12.9 billion.

The UNWTO study ranked France as world’s most popular tourism destination with 83 million tourists in 2012, followed by the U.S. (67 million visitors), China and Spain (57,7 million) and Italy (46.4 million).

Turkey came in sixth in the world rankings with 35.7 million tourists, total tourism revenue of $25.7 billion and $719.9 spent per head.

Germany, the United Kingdom, Malaysia and Russia completed the top 10.

The UNWTO study further showed that the most favorite city destination in 2012 was Bangkok with 16 million visitors, followed by London (due to the Olympics), Paris, Singapore, New York, Istanbul, Dubai, Kuala Lumpur, Hong Kong and Barcelona.

Barometer: Greek Hoteliers Optimistic On The Outlook Of Third Quarter