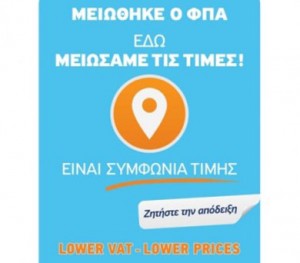 Greek restaurants, taverns, cafes and bars with this sticker on their window have lowered their prices.

Τhe federation representing the owners of bars, cafes and restaurants (POESE) has announced where interested parties can receive the special blue sticker indicating that they have lowered their prices as the reduced value-added tax (VAT) rate of 13 percent comes into effect on 1 August.

According to reports, some 7,000 Greek restaurants, cafes and bars have already applied to receive the sticker (see photo).

The sticker is distributed by the Hellenic Confederation of Professionals, Craftsmen and Merchants (GSEVEE) to its members who display their adjusted price lists as proof that they have incorporated the VAT reduction, from 23 percent to 13.

Greece is following the model that was successfully implemented in France in 2009 when the VAT rate in the food service sector was reduced from 19.6 percent to 5.5 percent.

French restaurateurs and cafe/bar owners who lowered their prices were rewarded with an official sticker on their window that read “A cut in VAT is a cut in prices!”

The VAT on Greek food services has been cut to 13 percent (from 23 percent) as of 1 August until 31 December.

According to the government, the VAT rate will remain at 13 percent after the five-month trial period only if the reduction assists in conquering tax evasion, which means that all businesses must issue receipts to their customers.

To see where the stickers are distributed, press here.