Forum: Developing A Seaplane Network To Service The Greek Islands 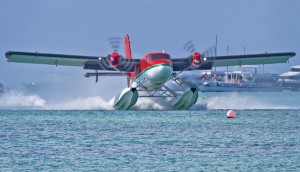 The Region of South Aegean will hold a forum on Syros on Tuesday, 30 July, that will focus on the advantages of developing a seaplane network to connect the Greek islands. The forum entitled “Greek Islands: An ideal location for the development of seaplanes” will aim to provide useful information to municipalities, port authorities and tourism professionals.

This is the first forum on seaplanes that follows a bill voted by the Greek Government in April that simplifies the licensing and operation of waterways in Greek waters.

“The time has come for action to be taken and for specific timelines to be set for seaplanes to actually launch this time,” the vice governor of Cyclades Sub Region, George Poussaios, said in an announcement. Mr. Pouseos participated in the committee that drafted the new law that concerns the operation of seaplanes in Greece.

The forum will address the development of waterways in Greece and licensing issues, the launch of seaplanes in Greek waters, investments and intermodal links between the islands.

The Region of South Aegean considers the launch of seaplane routes as an advantage for the Greek islands and already has held meetings with the Ambassador of Canada to Greece, the president of the Piraeus Port Authority, prospective investors and corporate executives.