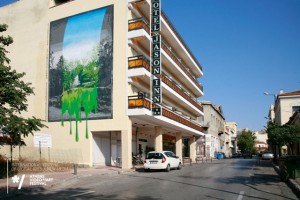 The 9th International Festival of Digital Arts and New Media “Athens Video Art Festival”  successfully wrapped up recently with the unveiling of a mural on the side of the Jason Inn Hotel on Agion Asomaton Street in central Athens.

The construction of the mural entitled “Some color for our city” was carried out by visual artist Manolis Anastasakos and was the third out of the festival’s three symbolic actions of artistic interference in the city, under the spirit of the motto “Living Athens.”

The two previous actions, carried out by volunteers and artists, included the refurbishment of the historic center’s streets and the street art decoration of the exterior of 15 stores. 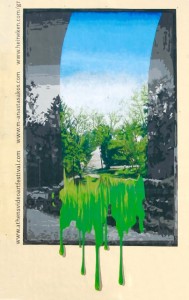 The mural entitled «Some color for our city» by visual artist Manolis Anastasakos was created on the wall of the Jason Inn Hotel in Athens.

The Athens Video Art Festival took place 7-9 June in the Greek capital. For three days technology met art in five spots of the historic center of Athens and transformed the city into a prototype mosaic of expression. Art was expressed through new capacities of technology starring more than 350 artists, chosen among 1.500 applicants from 58 countries.

Under the motto “Living Athens” and motivated by their love for art, more than 18.000 citizens visited the festival’s spots and browsed the areas of the historic center.

The purpose of the festival was to contribute to the aesthetic revitalization and the suburban improvement of the city.

This year’s event, with free admission for the audience, hosted exhibitions, screenings, workshops and live acts in public and private, indoors and outdoors, living and abandoned spaces.

The Athens-Attica & Argosaronic Hotel Association supported the event for the third consecutive year.