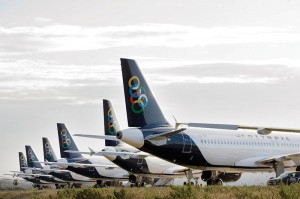 Greek carrier Olympic Air announced on 22 July that it would stop its flights from Athens to Thessaloniki and Iraklio, Crete, as of 13 October 2013.

Moreover, on 30 September the carrier will cut the connection between the Greek capital and Rhodes.

In a letter to travel agents and associates, Olympic Air informed that passengers that have made bookings after the mentioned dates to or from Thessaloniki, Iraklio and Rhodes will receive a full refund.

Alternatively, according to the carrier, passengers that do not want a refund could switch their tickets to flights to the same destinations that are operated by Aegean Airlines.

New Airline Plans To Connect Greece To U.S., Canada In 2014