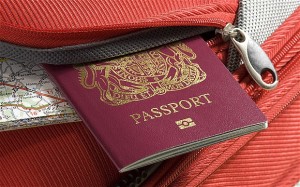 As of 19 July 2013, for traveling to Europe, non-EU citizens need a valid passport fulfilling the following criteria: