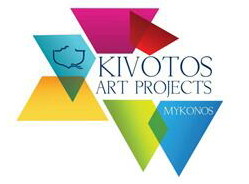 Kivotos Hotel on Mykonos launches the second of a series of in-house art exhibitions on 27 July, proving there’s much more to the Cycladic isle than fabulous beaches and nightlife.

Kivotos Art Projects, which is being curated by Dr Sozita Goudouna, constitutes a series of innovative contemporary art shows with works by 23 emerging and established artists who utilize various media including painting, sculpture, photography, video, multimedia and art installations.

The exhibitions, which kicked off in May and will run consecutively through October 2013, are the first to be held at Kivotos Hotel’s new art space. Hotel guests and exhibition visitors can also enjoy music and theatre performances that are being staged throughout the summer as part of the art space’s launch celebrations. Kivotos Art Projects is participating in the Aegeanale international arts and culture platform which was launched last year on Mykonos and the tiny sacred isle of Delos under the auspices of the Greek Tourism Ministry.

The exhibitions hosted at Kivotos Hotel also encompass a philanthropic element as all proceeds from the sale of an objet d’art specially designed by artist Sophia Housou and available at Kivotos, as well as a proportion of revenue from the sale of exhibition works, will go towards supporting the ELPIDA Association of Friends of Children with Cancer.

The 27 July exhibition launch will also feature a performance by prominent choreographer Apostolia Papadamaki, DJ sets by Katerina Kafetzi aka DJ Kafka from En Lefko 87.7 FM and a live show by the band Penny & the Swingin’ Cats.