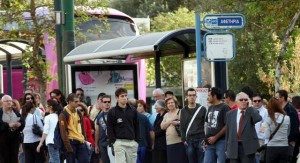 Public transport in Athens will be disrupted on Tuesday 16 July as the country’s main private and public sector umbrella unions, GSEE and ADEDY, have launched a general strike to protest the government’s plans to cut more public sector jobs in the country.

There has been no announcement in regards to the electric railway (ISAP) or whether the metro will be disrupted in any other way.

Air traffic controllers have also announced a work stoppage between noon and 4 pm that will lead to flight cancellations and reschedules.