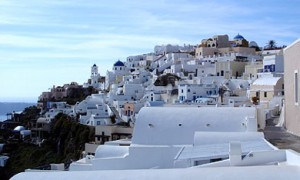 Arrivals to Greece are increasing and so are the country’s hotel prices, recent data has shown.

While officials in Greece are predicting a record-breaking 17 million tourists this year, the average hotel rates are increasing this month in comparison to June and last July, according to online booking company Trivago.

Santorini’s Imerovigli occupies the first place on Trivago’s list of most expensive destinations in Greece for July 2013 with an average hotel price for a double room at 335 euros. Imerovigli is followed be two other destinations on Santorini, Oia and Firostefani, with average prices at 319 euros and 288 euros respectively.

The list of the five destinations with the largest price increase is complemented by Mykonos town and Ialysos on Rhodes with an increase rate of 59 percent.