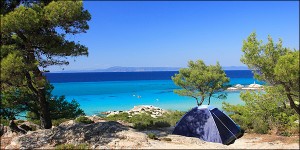 Free camping is banned in Greece.

The new bill for Greek tourism that was recently tabled in Parliament looks set to crack down on free campers who pitch their tents on beaches, in forests and other public spaces.

According to the bill, free campers in Greece could find themselves paying a fine of 300 euros if discovered by the police.

The fine has more than doubled as it was previously set at 147 euros.

The new bill for Greek tourism is currently being processed by the relevant committee of Parliament and has not yet been voted.

Free camping is prohibited in Greece and in particular “tent setup or caravan parking in archaeological sites, along the coast, on the outskirts of public forests, in forests and spaces for public use in general.”