Have you ever wondered how you would describe Greece with a single word? How would you sum up a nation with such a vivid presence? WOW NOW conducted its very own digital campaign that seeks to highlight the country’s true potential. The title of this campaign is WOW GREECE aka World of Words – Greece. 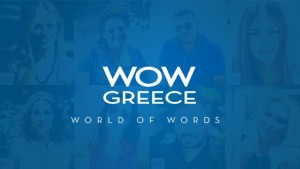 WOW Greece (aka World of Words – Greece) is the title given to the brand new digital campaign that seeks to highlight the true potential of Greece, as sponsored by WOW NOW digital and interactive magazine designed exclusively for iPads.

Within the WOW GREECE campaign, well renowned celebrities, artists, business executives and driving forces of the media pooled their voices together in an effort to bring to surface the optimistic side of modern Greece with their own choice of word. The scope of this campaign is to spread awareness on a different perspective of Greece.

WOW GREECE seeks to showcase a country that is enveloped by creativity, positive thoughts, inspiration and aspirations. A Greece that’s different to the one that’s portrayed in the media; a Greece that can live up to the nation’s true potential.

WOW GREECE was brought together with the contribution of the following people (in alphabetical order):

Benaki Museum To Expand Message Of Hellenism Beyond Borders