HotelBrain: PR Ambassador of Small Luxury Hotels of the World for Greece 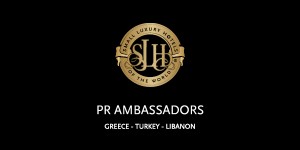 HotelBrain has announced that with immediate effect it will assume the role of the authorized and exclusive Small Luxury Hotels of the World PR Ambassador for Greece, Turkey and Lebanon.

According to the hotel development and management company, this appointment further builds on the strong and long standing cooperation between HotelBrain and Small Luxury Hotels of the World.

HotelBrain will now manage the day to day responsibilities associated with the role, which include:

The SLH Ambassador will provide local media with full information packs (including event information, newsletters, interviews, images, facts and figures) covering the yearly activity of Small Luxury Hotels of the World and its member hotels. The ambassador will also respond to media requests regarding specific hotel features or reviews.

Small Luxury Hotels of the World is among the fastest growing hotel affiliations, comprising over 520 hotels in more than 70 countries, 42 of them located in various Greek destinations.