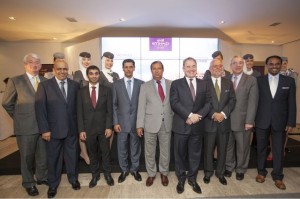 The national airline of the United Arab Emirates (UAE) launched its non-stop three flights per week service between Sao Paulo, its first destination in South America, and Abu Dhabi, the UAE’s capital, on 1 June.

“Our services to Sao Paulo provide the first direct air link between the commercial centres of Sao Paulo and Abu Dhabi, which support the growing economic, tourism and trade relations between Brazil and the UAE,” Mr. Hogan said.

Etihad Airways now connects Brazil-based air travelers, via Abu Dhabi, with popular destinations across the Arabian Gulf, North Africa and the Levant, as well as further east in China and Japan and across Asia.

Building upon its reputation of connecting communities around the world, Etihad Airways will provide a strong link for the Japanese population in Sao Paulo, the largest Japanese community outside Japan, flying to Nagoya and Tokyo.

Furthermore demand is already strong from the Arab community in Sao Paulo, predominantly made up by residents of Syrian and Lebanese descent, who can now fly to the UAE, Arabian Gulf and Levant with Etihad Airways.