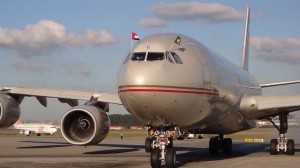 The first flight touched down at Guarulhos International Airport on 2 June at 4:35pm local Sao Paulo time, operated by an Airbus A340-500 aircraft.

The new Brazil service marks Etihad Airways’ entry into its sixth continent and an important move in increasing its presence across BRIC (Brazil, Russia, India and China) high growth nations. Brazil has the world’s sixth largest economy – larger than that of the UK – and it is the largest country in South America with the biggest population, almost 200 million.