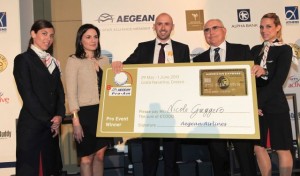 The international golf tournament Aegean Airlines Pro-Am was held with success, for the eighth consecutive year, in the award-winning signature courses of Costa Navarino, Messinia, The Dunes Course and The Bay Course.

Aegean’s tournament, which gathered 240 professional and amateur players from 21 countries of the world,  was organized under the auspices of the PGAs of Europe and the PGA of Greece, as well as with the support of the Hellenic Golf Federation.

This year’s tournament, which was held from 29 May to 1 June, was honored by the participation of 60 teams, consisting of one professional and three amateur players.

The winner in the professional category of the “8th Aegean Airlines Pro-Am” was Italian Nicolo Gaggero. He was followed by the Israeli team, led by professional Itamar Cohen. 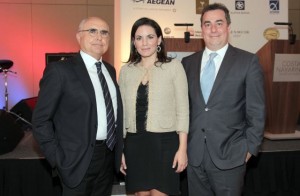 The substantial prize of 70,000 euros was divided among the 60 PGA professionals, while gift awards were given to the amateurs. The first winning professional – Nicolo Gaggero – received the “Aegean Airlines Pro-Am Trophy” along with a 7,000 euros cheque.

As every “Aegean Airlines Pro-Am” tournament, this year’s event as well had its name linked to a public benefit purpose. The amount of 8,000 euros was donated to the orphan charity SOS Children’s Villages.