Kefalogianni Invites Greek-Americans To Holiday In Greece This Year 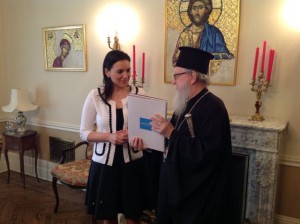 Issues concerning the Greek-American community and Greece’s course in general, were the main topics discussed on Monday, 3 June, between Greek Tourism Minister Olga Kefalogianni and Archbishop Demetrios of America at the Greek Orthodox Archdiocese of America in New York.

Mrs. Kefalogianni is currently on an official visit to the U.S. to promote Greece and further improve the image of the country. Her next stop will be Canada on 6 June.

After the meeting with Archbishop Demetrios, the tourism minister spoke highly in regards to the Greek-American community, which she considers a “bridge” connecting Greece to the U.S.

“Greece has gone through a difficult time, but today we are undergoing economic recovery. The effort continues and in this battle we need the help of our expat brothers,” she said.

She then invited the “Greeks of America” to spend their holidays in Greece this year.

The tourism minister is also scheduled to hold meetings with leading U.S. tour operators and airline executives to discuss the possibility of launching direct flights between Athens and New York.

It is noted that on 2 June, Delta Airlines resumed the nonstop Athens–New York service for the summer. Greece has no other direct airline connection with the U.S..