Cyclists To Bare All In Upcoming Naked Bike Ride In Thessaloniki 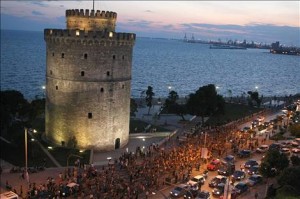 Thessaloniki will host the 6th World Naked Bike Ride on Friday 7 June 2013 to demonstrate the rights of cyclists and to protest against car culture.

According to the organizers website, the ride is a call against the indecent exposure of citizens and to the pollution cars create.

“We are facing car traffic with our naked bodies as the best way to defend our dignity and expose the vulnerability cyclists and pedestrians face on our streets, as well as the negative consequences we all face due to dependence on oil and other forms of non-renewable energy,” the organizers say.

At the end of the ride a party will follow.

World Naked Bike Ride is an international movement, in which some 70 cities around the world participate. The first ride took place in Vancouver, Canada, in 2004.

The Art of Change: Innovating Our Way Out of the Crisis