Greece In German Preferences But There Is Room For Improvement 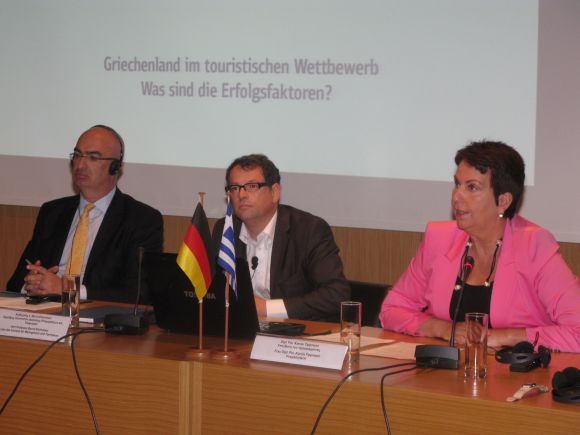 Yiorgos Tsakiris, president of the Hellenic Chamber of Hotels, with Professor Bernd Eisenstein and Karola Tippmann of Westküste University of Applied Sciences in Germany. 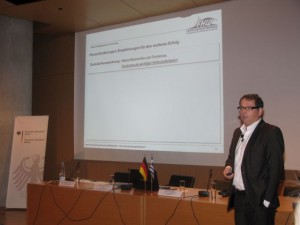 Professor Bernd Eisenstein from the Westküste University of Applied Sciences.

Entrepreneurship with professionalism, the special ability of cooperation and having a strong profile are among the strategic success factors for Greek tourism, according to a study conducted by the the Westküste University of Applied Sciences in Germany.

The study, conducted in late 2012, was presented on 28 May at a special event organized by the Hellenic Chamber of Hotels at the Acropolis Museum.

While analyzing the study’s results, Professor Bernd Eisenstein said Greece should invest more in culture to boost the flow of German tourists and attract more overseas markets to the country.

He underlined that Greece should also focus on promoting marine tourism, gastronomy and special forms of tourism. 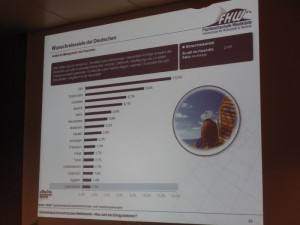 According to the study, Greece ranked last when Germans were asked to “choose a country to visit for five days if expenses were paid.” Greece received 1.3 percent of preferences (see photo).

However, as a destination, Greece is in the thoughts of the Germans, since 90 percent said they did “think of Greece as a holiday destination” and 57 percent characterized the Greek tourism product as “a good product.”

Only 16 percent of the respondents said they were considering to visit Greece in the next three years. The study showed that Germans mainly opt for Spain, Italy, Turkey, France and the U.S..

The study showed that Greece is currently in the 12th place of the preferences of the Germans. This year, 1.3 percent of the Germans that responded to the study said they planned to spend their holidays at a Greek destination.

Moreover, it would seem that the economic crisis is not an obstacle for Germans interested in visiting Greece.

When asked “What comes spontaneously to mind when hearing the word GREECE as a travel destination,” the “economic crisis” is mentioned in the 11th and last place after the Acropolis, sun, sea, culture, food, Athens, etc.