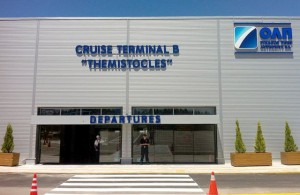 The second international cruise passenger terminal was inaugurated at Piraeus Port on 27 May. The terminal is at Gate E12 and can serve up to 25,000 passengers per day.

By the end of 2013, all three cruise terminals of Piraeus Port will cover an area of 15,500 square meters.

The president and CEO of the Piraeus Port Authority, George Anomeritis, said that with the new extension of the piers, it is estimated that Piraeus Port will become the most important hub among Mediterranean cruise ports.

According to data on tourist arrivals and departures at Piraeus, released by the authority, there has been an increase of 24.68 percent in the first quarter of 2013, compared to the same quarter in 2012.