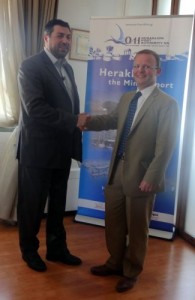 The British Ambassador to Athens, John Kittmer, was received today, 24 May, by Heraklion Port Authority President and CEO, Ioannis Bras, in Heraklion, Crete.

Mr. Bras gave the Ambassador a tour of the authority while discussing issues on tourism, shipping and cruise in particular.

While touring the cruise passenger terminal, the Ambassador was informed in regards to the authority’s procedures for receiving cruise ships and passengers at Heraklion Port.

Mr. Bras referred to the authority’s innovative actions that aim to enhance the travel experience of visitors.

Mr. Kittmer was also fully briefed on security issues and the implementation of the International Ship and Port Facility Security Code (ISPS Code).

At the end of the meeting, Mr. Bras requested that the Ambassador convey the message to British citizens that Crete was a safe and hospitable destination.