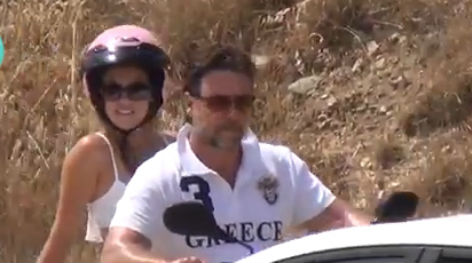 “How is it that I’ve lived 49 years on this planet but never been to the Greek islands before?” academy award-winning actor Russell Crowe recently wrote on his twitter account.

The Australian actor was recently spotted on the Greek island of Mykonos of the Cyclades group, wearing a white T shirt with “Greece” printed on it. He was accompanied by his new girlfriend Samantha Barks.

According to press reports, Mr. Crowe was impressed by the island’s colors, sea and sun and was quick to pass this on to his followers on twitter:

Below is a a video of Russel Crowe riding around Mykonos with his girlfriend. – Local Mykonos LiveTV