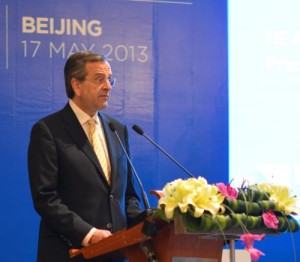 Greek Prime Minister Antonis Samaras concluded his five-day official visit to China on Sunday, 19 May, during which the Chinese side expressed a strong interest for projects that involve infrastructure, privatization and real estate in Greece.

Mr. Samaras traveled to China with a large delegation of ministers and businessmen to boost bilateral trade, investments and tourist travel to Greece.

While speaking at a Hellenic-Chinese business forum in Beijing, Mr. Samaras said that fears of a “Grexit,” an exit of Greece from the euro, have turned into a “greekovery,” an expectation of the recovery of the Greek economy.

The Greek premier was accompanied by 87 businessmen from the key sectors of the Greek economy: shipping, banks, tourism and property, agricultural and food, technology and building materials.

The Greek PM’s trip to China included visits to Beijing and Shanghai and, according to the Greek Development Ministry, some 450 business meetings between Chinese and Greek entrepreneurs took place in both cities. 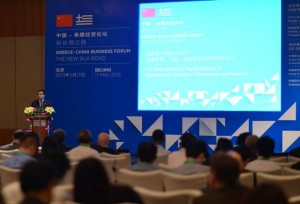 In Shanghai, 184 individual B2B meetings were held between Greek enterprises and the 120 Chinese enterprises that attended the business forum there. The meetings mainly evolved around tourism and real estate (33 percent), shipping (29 percent), banks (17 percent) and food (14 percent).

According to the Development Ministry, 11 trade and cooperation agreements were signed during the PM’s trip, among which: 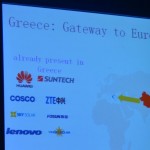 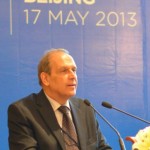 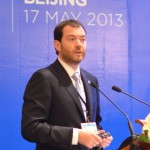 Athens Guide Smartphone App Soon To Be Available In Chinese