Over 200 Greek and international delegates and exhibitors from 25 countries and a prestigious line up of senior officials and key decision makers from the global cruising and yachting sectors will anchor in Athens at the end of the month for a series of debates on the prospects and challenges facing sea tourism in the Eastern Mediterranean and the Black Sea regions.

They will be hosted by the organizers of the 2nd Posidonia Sea Tourism Forum on 28-29 May and greeted by a strong contingent of senior Greek government officials that will present the country’s sea tourism offering and competitive product advantages as Greece is vying to attract much needed foreign direct investment to boost its ailing economy.

The forum will take place at the Megaron Athens International Conference Center.

According to organizers, Minister of Shipping Konstantinos Mousouroulis, Minister of Tourism Olga Kefalogianni, Deputy Minister of Development Notis Mitarachis, the Secretary General of the Greek National Tourism Organization Panos Livadas and the President of the Hellenic Republic Asset Development Fund Stelios Stavridis will set the pace of the forum’s agenda.

The agenda of the 2nd Posidonia Sea Tourism Forum lists issues such as port and marina privatization, infrastructure and future development and prospects of the cruise and yachting sectors in Greece and the synergies that can be derived by intraregional cooperation with neighboring destinations. 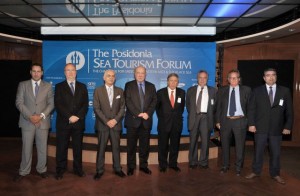 The forum is expected to stimulate a heated debate on how to increase Sea Tourism business in Greece and the region.

“With six million passengers per year the Mediterranean is the world’s second largest cruising region, as well as a preferred yachting destination for hundreds of thousands of tourists from all over the world, making sea tourism an important economic growth vehicle for Greece and the entire region,” said Theodore Vokos, project director of Posidonia Exhibitions.

The forum has been embraced by 30 regional destinations that have booked a stand at the event’s exhibition to showcase their offering in front of a global audience of cruise and yachting operators.

A dedicated schedule of B2B meetings for representatives of ports and destinations has been booked with officials from Paul Gauguin Cruises, Seabourn Cruise Line, Silversea Cruises, Louis Cruises and Windstar Cruises.

The Forum has also received official endorsement from CLIA Europe, which welcomed Posidonia Exhibitions as a member and has identified the Posidonia Sea Tourism Forum as the best platform to strengthen cruising in the region.