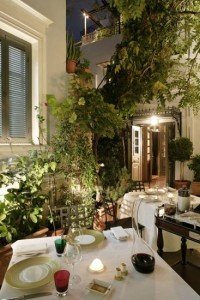 Greek restaurant “Spondi” in Pagrati, Athens, was recently announced in the top 100 list of the annual World’s 50 Best Restaurants for the second consecutive year. Spondi is the only restaurant in Greece listed both years (2012-2013).

The winners were announced on 6 May at The World’s 50 Best Restaurants 2013 sponsored by S.Pellegrino & Acqua Panna high-profile awards ceremony; a who’s who of the restaurant world, held at London’s Guildhall.

This award comes shortly after Spondi retained its two-star Michelin Guide rating, announced earlier in March, and its listing as one of Europe’s best in The European 50 Best Restaurants announced this past December; a recognition also achieved in 2009 and 2010.

“We are extremely proud and honored to be amongst the world’s top restaurants. It is testament to our team’s dedication and commitment to maintaining and consistently raising the bar in quality and service, even during challenging times,” Spondi’s owner, Apostolos Trastelis, said.

Winner of Best Restaurant was El Celler de Can Roca in Girona, Spain, a title formerly held by this year’s No. 2 winner, Denmark’s Noma.

The World’s 50 Best Restaurants is organized by Restaurant magazine, one of the UK’s leading industry magazines.