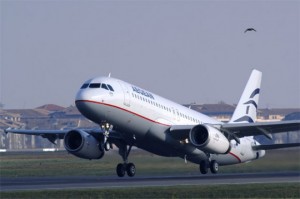 “Despite the four years of the crisis, Aegean has managed to increase its contribution to tourism by 54 percent, from 2.2 to 3.5 million passengers,” Aegean Airlines’ vice-president, Eftichios Vassilakis, said on 25 April during a press conference held on Rhodes to present the new flight schedule from Rhodes and Kos.

According to Mr. Vassilakis, Aegean will continue to support in practice the development of the Greek regions and Greek tourism this year.

In particular, the airline’s international traffic from Rhodes has increased by 140 percent in the past four years, with the operation of an aircraft base.

For 2013, the company will increase the number of its aircraft to four, based from Rhodes, with 27 additionally direct international flights, aiming at a further 40 percent increase.

From the new base in Kos, respectively, there will be 10 direct international flights to five countries, with crews based in Rhodes. The company’s strategic decision to create a new base on the island of Kos is expected to significantly support tourism traffic and the island’s local economy.

From these 158 international flights, 130 are made from regional airports in Greece, thus supporting tourism destinations.

Also, with the addition of the country’s new bases at the airports of Kos and Kalamata in 2013, the company’s direct international flights are now made from eight bases (Athens, Thessaloniki, Heraklion, Rhodes, Corfu, Kos, Kalamata, Larnaka).