Etihad Airways To Launch Daily Flights Between UAE And Belgrade 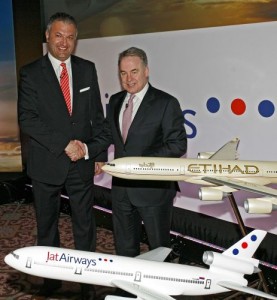 Etihad Airways announced recently that it will commence daily nonstop flights between its home base of Abu Dhabi and Belgrade, the capital of Serbia, from 15 June 2013.

Etihad Airways will operate a two cabin Airbus A319 aircraft on the service between Abu Dhabi and Belgrade, configured to carry 106 passengers, with 16 seats in Pearl Business Class and 90 seats in Coral Economy Class.

JatAirways will also place its code on a number of the flights operated by Etihad Airways’ equity partner, airberlin. A major highlight of this would be the provision of a direct link for passengers traveling from Belgrade, via Berlin, to Chicago in the US.

Olympic Air To Connect Santorini With Mykonos And Heraklio

Lufthansa To Launch A380 Service To Shanghai