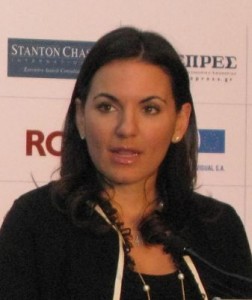 “Early bookings are going very well and it gives us reason to believe that we will have a large increase in tourism to our country,” Greek Tourism Minister Olga Kefalogianni said in a statement today, 11 April.

According to Mrs. Kefalogianni, an increase in arrivals is expected from both Greece’s traditional markets and developing markets such as Russia.

For some time now, Greek tourism professionals have been predicting some 17 million arrivals to Greece this summer, which translates to an estimated 11 billion euros in tourism revenue.

According to the president of the Hellenic Federation of Hoteliers, Yiannis Retsos, the bulk of this year’s tourism traffic will be coming from Russia, while Germans are also expected to increase in number.

Speaking to Kathimerini newspaper, the federation’s president stressed that tourism had not been exempt from the effects of the ongoing crisis and that the hotel sector was especially hard hit.

Mr. Retsos said that high taxes were among the biggest threat to the sector and called on the government to reduce the VAT on catering services from 23 percent to 13 percent.

“Such a move would bolster the entire tourism service industry,” he told Kathimerini.

Greece Expects To Welcome One Million Russian Tourists This Year