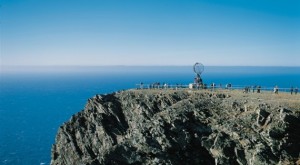 The North Cape tour was once again the best-selling shore excursion destination of Hurtigruten, according to the Norwegian operator. Hurtigruten described the trip as a visit to “the end of the world.”

Last year, some 54,000 Hurtigruten passengers traveled to the Norwegian attraction that is famous for its rock formations that act as a viewing platform for the famous midnight sun.

Hurtigruten guests flocked to the northernmost point of Europe on both the “North Cape” and “Breakfast at the North Cape” excursions, with the natural attraction being the spectacular plateau that rises a dramatic 307 meters straight up from the Arctic Ocean.

According to a press release, the North Cape and Hurtigruten have always been closely linked. After the shipping company expanded the route all the way to Kirkenes in the early 20th century, just a few years after its foundation some 120 years ago, the ships also started to pass the North Cape and passengers could admire the famous rock plateau from the ship.

The cruise line offers a total of 45 different excursions on the 12-day Classic Round Voyage from Bergen to Kirkenes.

Hurtigruten, which has run voyages along the Norwegian coast since 1893, is represented in Greece by Discover the World Marketing.