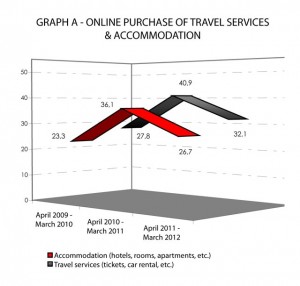 The online purchases Greeks made for accommodation and other travel services, during the April 2011-March 2012 period, dropped  compared with the corresponding period of the previous year, according to figures released recently by the Hellenic Statistical Authority (ELSTAT).

For the same period it appeared that Greeks also shopped “elsewhere” to rent a car or buy airlines tickets since online shopping for travel services showed a 21.5 percent fall.

In regards to the drop in online purchases of accommodation and travel services, ELSTAT noted the reversal observed in the data of the last three years (see Graphs A and B). 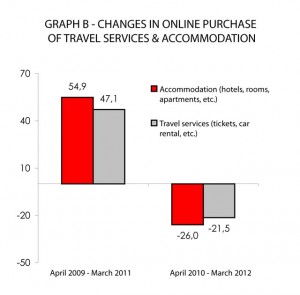 The data on last year’s online shopping habits of the Greeks for accommodation and travel services is part of a broader survey that was conducted on the use of information and communication technologies by Greek households in 2012.