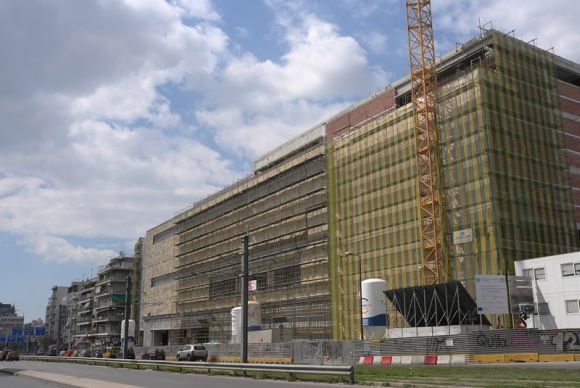 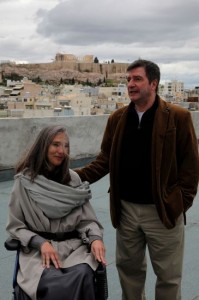 EMST Director Anna Kafetsi and Athens Mayor Giorgos Kaminis on the rooftop of the soon-to-be National Museum of Contemporary Art.

“The National Museum of Contemporary Art is on a crossroad, where the one side is the Acropolis Museum and the other in the center of Athens, showing that Greece has not only history, but also a present and a future,” Athens Mayor Giorgos Kaminis said yesterday, 8 April, during his visit to the under-construction museum at the former Fix brewery that links the start of Syngrou Avenue to the center of Athens.

“Today’s visit is an experience that I hope all Athenians and visitors from the rest of Greece and abroad will experience soon,” Mayor Kaminis said.

The construction of the building that will house the National Museum of Contemporary Art (EMST) is expected to be completed by this October and inaugurated in March 2014.

The museum will have two entrances, one from Syngrou Avenue and one from Kallirois Avenue and a rooftop restaurant that will offer a panoramic view of Athens.

The upper floor, a space of 1,000 square meters, will host outdoor screenings and an open-air sculpture exhibition featuring new creations of leading artists.

The ground floor area of 600 square meters will be the museum’s space for temporary exhibitions and will also serve as an amphitheater for 280 people.

The reconstruction of the building will retain prominent features of the old Fix brewery, such as the facade, thus preserving an important monument of Greece’s industrial heritage.

According to reports, the original facade will be surrounded by a concrete structure to be used as an exhibition space of contemporary design.

Transformation from brewery to museum: a 13-year-old project

However, 13 years later, the project is near completion.