Athens Introduced To New Markets At GIBTM 2013 In Abu Dhabi 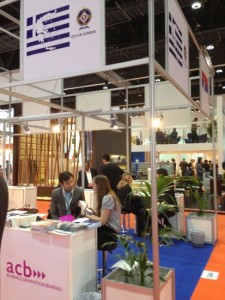 Chairman of the Athens Development and Destination Management Agency, Yiorgos Broulias, at ACB’s stand at the GIBTM 2013 exhibition.

Athens was introduced to the United Arab Emirates (UAE), the Asian and the Far East markets as a destination for conferences, corporate meetings and incentive travel during the Gulf Incentives Business Travel & Meetings Exhibitions 2013 (GIBTM) held 25-27 March in Abu Dhabi.

The Athens Convention Bureau (ACB) represented Athens and was the only Greek stand at this year’s GIBTM.

ACB’s participation was part of the Municipality of Athens’ strategy to enhance the image of the Greek city in the international travel market and investigate prospects to approach new markets.

During the exhibition, ACB representatives held over 60 prescheduled and unscheduled meetings with hosted buyers – conference and event organizers, representatives of international organizations and bodies, executives of leading companies and representatives that specialize in the MICE market.

According to ACB, the latter showed a keen interest for Athens, particularly in the fields of incentive trips and corporate meetings and events.

Hosted buyers from India and China were also reported of showing an interest in the Greek capital.