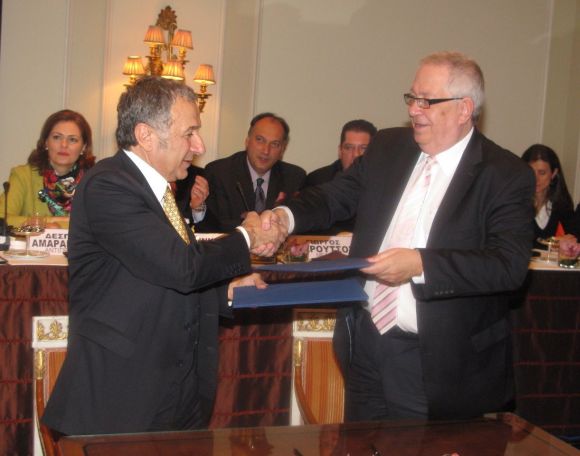 The president of the Association of Turkish Travel Agencies (TÜRSAB), Başaran Ulusoy and HATTA’s president, Yiorgos Telonis, shake hands after signing the Memorandum of Cooperation.

A Memorandum of Cooperation was signed between the Hellenic Association of Travel & Tourist Agencies (HATTA) and Association of Turkish Travel Agencies (TURSAB) during the open session of HATTA’s annual general assembly on Wednesday, 27 March, in Athens.

The memorandum signed between HATTA and TÜRSAB aims to expand the long-term collaboration between the two associations, develop tourism between the two countries and remove disincentives in travel.

According to the memorandum, a Joint Tourism Board will be established to create and promote joint tourism packages for overseas and developing tourism markets. 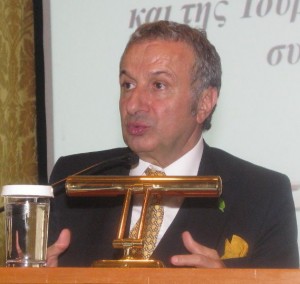 During his speech, TÜRSAB President Başaran Ulusoy said that during this year, the association would hold nine familiarization trips in different regions of Greece to explore opportunities to promote new tourism products.

“Tourism professionals of both countries have great potential for cooperation and the two countries are extremely attractive destinations in the Mediterranean,” he said.

During the January 2012-January 2013 period, Greek arrivals to Turkey increased by 2.21 percent.

Last year, 669,823 Greeks visited Turkey while the number of Turkish tourists that visited Greece amounted to 552,090 (37,427 traveled by boat from Turkey to Greece).

“However, the procedures to get a visa from Turkey to Greece create obstacles for tourism,” he said. 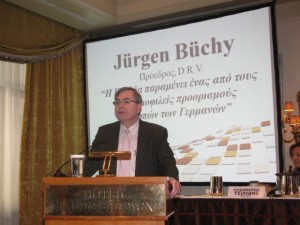 “Greece – especially its coast and islands – belongs to the most favourite travel destinations of Germans mainly in the summer season,” he said during his speech and underlined that the majority of tour operators propose that Greece has good chances for a comeback.

DRV’s president said that for Greece to make a comeback and have ongoing tourism growth, investments must be made in tourism infrastructure such as hotels and airports.

He said Greece should make a good name for itself in quality tourism and concentrate on its unique selling points and not count on low cost tourism (for example, all-inclusive resorts).

“As revealed by customer surveys, Greece has weaknesses compared to competing tourism destinations in the Mediterranean of value for money, service and accommodation,” Mr. Büchy said.

He added that Greece’s advertising should be “rejuvenated” and the tourism offering must be adjusted to suit customer needs and the new target groups that have sprung up.

“…If strikes or demonstrations sometimes are in focus of the media, Greece has to convince through its service, hospitality, good infrastructure and a variety of different accommodation as well as their cultural heritage,” DRV’s president said.

Greece To Launch Visa-Free Program For Turks Again This Year